BenQ GV1 is one of the compact projectors you have ever come across. When you see the projector for the first time, you will be surprised. It does not look like a projector at all. At first, you may mistake the projector for a Bluetooth speaker. Its appearance is unique in many ways and cute, as some may call it.

From the moment you see the Ben Q projector, you will fall in love with it. That’s is just the beginning. The projector may seem small but is able to project an image of up to 100 inches huge. In houses where space is limited, the projector is an ideal one to get. The only limitation is that the projector works well in a dark environment. 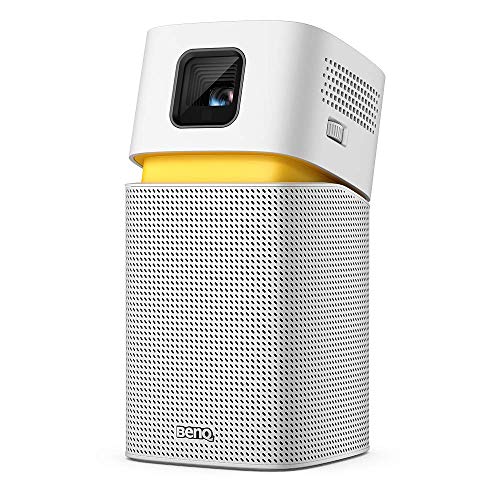 There is a button that toggles the projector from being a project tor and a Bluetooth speaker. When you look closely at the projector’s side, it comes with a manual focus ring to the side. The GV1 has an auto keystone that enables you to have an aligned image on the screen. The projector’s back comes with two ports, one to be used for power adapter connection and a USB C port.

The USB port has been designed to allow you to connect the projector to different compatible smartphones, laptops, and many other devices. You also have a chance to connect the USB C card reader to show content such as videos and photos from a memory card and USB drive and is good for you. The only disadvantage the projector has is that it lacks a standard USB A port to easily connect other inputs.

Though the projector comes with the USB –C port, it does not work immediately to the project. It needs DisplayPort 1.1 support for GV1 to detect. For gamers, the projector is not available. That is because it lacks the HDMI that makes it impossible to connect gaming consoles. The projector’s design does not allow you to connect the HDMI to USB C adapter to solve the problem. It comes at a maximum brightness of 200 lumens when it’s plugged into power but drops low when on battery use. Its use is suitable for a small gathering as well as in a room that is in light.

The performance of BenQ GV1 is outstanding and cannot be compared to most projectors of the same value and class. Setting the projector for one is very easy from the start. You have to power it on set up the Wi-Fi, and you are almost done. You can stream via the Apple Airplay from the moment Wi-Fi is set up. For android users, it is also possible to use google cast for streaming. The advantage of the setting is that you don’t have to switch between streaming methods.

It’s hard to work with the projector when streaming wirelessly, such as content from iTunes and others. This is because neither of their iOS apps is compatible with the GV1. For YouTube, you enjoy it since it works well with it. For android users, you will have to install google home on your phone to cast content to the BENQ GV1. If your phone supports the DisplayPort 1.1, you can then plug the phone straight into the GV1 projector with no issues to it.

You will need to adjust the screen size to 60 inches from a few feet away for excellent projection on the screen. Technically the projector can project images that go up to 100 inches on the screen. To get the best on the 100 inches screen, you have to use it in a darkened room to maintain the image quality semblance. The 5W sound in the projector produces decent audio in a small room. The sound is decent indoors, but the same cannot be said outdoors.

You have to note that the brightness is not enough to be used in a large room or outdoors. For one, the images projected on the screen could be affected by the brightness in the room and outdoors if not careful. Take your time and enjoy your videos and other content in a room with controlled light. For a period of time, you enjoy the performance and the service the projector gives you perfectly. You can set the projector on the table tripod stand and floor to enjoy your entertainment ad content. Though the projector does not have a very high brightness is good for you in the room.

For every projector that hits the market, the manual or use guide is a must. Some people you may get immediately, and others you have to search online for it. BENQ projector comes with its user manual from the day you but you can also get one online any time you need. The user manual helps when it comes to controlling and operating the projector. When using the projector for the first time, it becomes much easier. BenQ GV1 shows what to do when you face difficulties while working with it. It’s easy to understand and comes in different languages to facilitate different languages.

The small portable projector is easy to carry from one point to the other. With this feature alone, it enables you to set up the projector easily. The projector can be placed on top of a table and also comes with a tripod stand for installation. It’s easy to work with no need for professional help. When done with the installation, the projector has the keystone feature that allows you to align the screen images correctly. The remote control also helps in all the installation process to the end.

Yes. The BenQ GV1 projector’s design allows it to work as a Bluetooth speaker and a projector.

Yes. Very good. BenQ projector is one of the best in the market with excellent performance and is known to be the best for home entertainment.

The projector uses the USB C port to connect top devices with ISBC connectivity. The projector can be connected to the USB storage via the IDB C cable to play media

Its recommended being placed on top of the table, floor, as well as the use of the tripod, stand for entertainment. It can still project a big image of up to 100 inches.

The BenQ GV1 projector does not project content in HD. Even so, it has a fantastic watchable image with a resolution of 480p. It’s able to project images up to 100 inches on the screen.

BenQ is a fantastic portable projector designed to work at home as a Bluetooth speaker as well. The stylish design of the projector makes it an ideal projector for space-saving at home. The projector is amazing from its design, but it has a lot of things to improve to be better. The lack of an HDMI port is an important issue to be looked into. This is because it affects connectivity is excellent, especially for gamers.

Other issues involve iOS streaming, which is hard to ignore when using the projector. The projector does not come with controls on itself, which is very disappointing. It’s more independent with the controls added to it rather than relying on the remote control. The projector may have a great design and easy operation for first-timers nut it may disappoint on some things. Android users can use the projector easily, which is an added advantage to them.

Myself Ruby Vivian, I am a BIGGER-screen enthusiast and I can’t lie. Served as an electric technician for 7 years now, and I loveee what I do. You can learn more about me here.