Nowadays HDMI cable Is Important as a connector for the projector and another device. So Projector Labs team decided to cover an In-depth blog post for you. We believe this information might help you a lot to understand about HDMI cables. 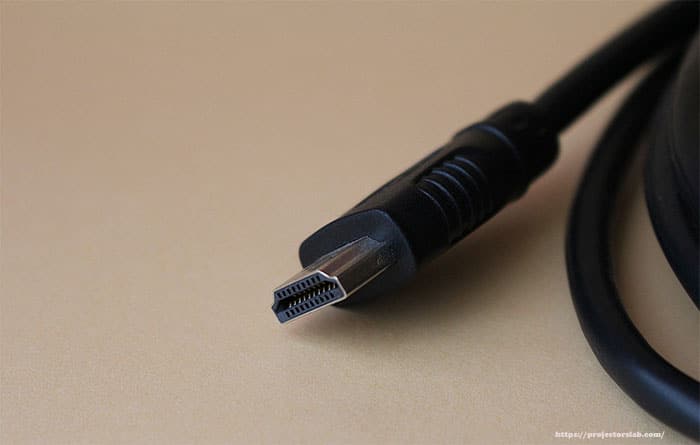 What Is HDMI cable?

HDMI cable is an interface for transmitting audio and video uncompressed from the HDMI device to a compatible monitor or projector for display. An HDMI cable comes with many properties and functions and is composed of twisted pairs. The HDMI cables enable you to connect your phone, laptop, and other compatible devices to the screen and have a large screen viewing. It makes your home entertainment much more comfortable and even better from just your phone.

Its good to note that not all HDMI capable projectors are capable of connecting to other devices, they have to be matched to work perfectly well in terms of HDMI versions. Although the length of the HDMI cable is not stated, the signal attenuation is determined by the quality and material of the cables. The HDMI 1.3 has two cable categories the certified cables that have been tested at 74.5MHz and the certified category that has been tested at 340MHz.

Some phones and devices have been designed to work with specific HDMI cables and ports, making it difficult if you buy devices that are not compatible. With an HDMI cable, you are sure to enjoy even better quality images since the cable can transmit uncompressed and compressed video and audio data.

What Does HDMI Cable Do?

The HDMI cable has a critical function when it comes to connecting your devices from another. The devices include TVs, media streamers, DVD players, gaming consoles, and many others. There are several types of HDMI cables, but all of them end up with the same function. The functions are to transmit data from the source to the screen or monitor.

The HDMI cable length is an essential factor that has to be put into considerations when selecting. The effect is enormous when connecting as when the cable is too long, and the signal becomes weak. It causes the images on the screen to blink as they try to connect and can be stabilized using the extenders, equalizers, and repeaters.

What Does An HDMI Cable Do For Your Projector?

Once you connect the HDMI cable to the ports, it transmits the content on the device to the projector then to the screen or wall. It has an essential function as an interface for connecting other devices. When doing a business presentation at the office, there is no way you will do it directly if it does not have a wireless connection. It means you will need to have an HDMI cable to do so. Even so, your phone must have the capability to work with the HDMI cables. We can say that the HDMI cables have a very significant function on the projector on transmitting content from the source to the screen both video, text and audio.

Several HDMI ports make it easier to transmit the multimedia signals. Here are some of the major ports.

The STB stands for HDMI set-top box. The HDMI port is designed to connect the gaming consoles and receiver to the projector. The HDMI STB port connects not only the consoles but also any other compatible devices. It’s not difficult to compromise when you are faced with new technology designed with the devices.

The HDMI ARC is known as the Audio Return Channel. It is a standard HDMI 1.4 that works to transmit a video signal to the speakers. It enables you to connect your device to the speakers without the need for external speakers. Most of the projectors in the market now come with inbuilt speakers. It was hard to get one before since all the designed were external speakers enabled. The reverse channel takes the audio signal from the air and allows it to listen on the HDMI cable.

This is a Mobile High definition Link. It is used to mainly connect the TV, projectors, and smartphones and display them to the screen. If you have presentations and movies on your phone and want to watch on the TV or projector, you connect using the MHL port. It means that you will connect your projector’s HDMI interface and the USB Smartphone to have a transmission take place.

The HDMI DVI port is used to connect the laptop to the TV and then act as the display interface. It is good to note that the DVI port connection does not transmit audio across the connection. If you are the HDMI standard 1.4, then audio transmissions using the DVI cables is possible.

How Do You Connect HDMI Cable To A Projector?

What Is The Function of HDMI Cable?

The HDMI cable has a very vital function when it comes to connectivity in projectors and other electronic devices. If you are intending to connect your projector to other devices for viewing purposes, then you will need to have an HDMI cable. The cable enables the content on your phone to be transmitted to the projector with works as a monitor. It is an easy job that will only take you a few minutes. The use of the HDMI cables also is contributed by the fact that it is very convenient. The HDMI cable connection is one of the best that you find widely in the market and used by a variety of electronic devices. It makes connection easier since you get different HDMI cable option while looking in the market.

What is the function of HDMI cable

What’s The Difference Between USB and HDMI?

Can A Bad HDMI Cable Damage The Projector?

Is There A Difference Between HDMI 1.4 and 2.0 Cables?

What is ARC In HDMI?

What Is The Latest HDMI Standard?

What Does HDMI Best Mean?

Do You Lose Picture Quality With a Long HDMI Cable?

What Happens If HDMI Cable Is Bad?