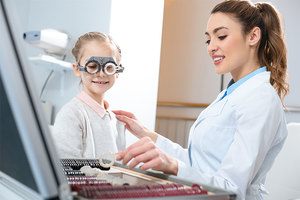 When you are using a projector that works well with its accessories like the screen and works in the right size meeting the requirement, then you are safe while viewing the screen.

When you are using the right screen, then the light that is likely projected on the screen is the visible light great for projection and safety.

The visible light has been filtered of the UV rays by the time it reaches the screen making it safe for your viewing and does not affect your eyes. Mostly the visible light is produced by the laser projectors.

It is true that the light produced by the projector may have an effect on your eyes, but with proper caution, you are able to prevent it. If you avoid looking at the lens for too long, you are able to avoid too much exposure from the screen. This is because there could be leakage of light from small areas on the screen enough to have an effect on you. When you are exposed to too much leakage of UV rays and others that are not good for sight, you may end up to having temporary eye issues. But since it can also be prevented from happening why not to do?

Sometimes prevention of something is better than a cure. Therefore get to understand if your projector is original and of quality standard, as it may have an effect on the way everything works. Many manufacturers have looked into the issue of light leakage and tried their best to solve the issue.

This has contributed a lot to the manufacturing of projectors that have fewer UV rays and release visible lights which are safe. Since that is the case, many of the projectors floodings in the market are less harmful to the eyes and produce incredible images with less light leakage. To be sure that you will take precautions for yourself, here are some of the safety matures you may take.

Safety Precautions You Should Know

The projectors have minimal effect on your eyes when compared to the televisions. This could be said so due to the fact that the projector shows images that are large in size making it easier for people to watch while compared to the TV sets since once struggles to watch correctly.

With projectors, you can sit as far as possible or near and still not get affected at all. The brighter the contents displayed on the screen the higher the possibility to have eye issues. Though the projector has less effect on your eyes than your projector, it is still good to avoid too much light and exposure.

The projector also produces blue rays which are known to have a shorter wavelength and lots of energy while travelling. The blue rays are able to have a great impact and effect on your eyes since it has a higher amount of wavelength. When you are exposed to the blue-ray for a long time, you feel like your eyes are strained and a bit painful. Here is a piece of detailed information on how blue radiation affects your eyes.

When you are exposed to the blue rays, you have a high chance of effect as almost all of the rays pass through the cornea the lens and up to the retina of your eyes. The light may have a significant impact on your sight, and you may end up having an early eye age. That’s not all when you are highly exposed to the rays you may have other effects like fatigue, dry eye, eyestrain. This could be contributed by bad seating, bad lighting and more.

All in all, we could say that anything digital that can have an effect on your vision is called digital eye strain. Also when you are too much exposed to the blue-ray, you may have retina damage. This is not that big but according to research too much exposure to the blue light could damage the retina cells and cause problems visions.

Sometimes when you touch your projector screen, you will find that it is warm or sometimes even hot. It is advisable not to stay too close to that screen and move a bit further away or switch it off for a little while before using it again. This is because what makes the screen to be warm is the infrared rays. Most of the latest projectors in the market have taken care of these issues to deliver a healthy viewing projector.

This way you are not affected by the projector while viewing. Though they are safe for use and has no effect on your vision, it is also good to avoid too much exposure to the screen. Is not that too much exposure could bring problems to you but it is just safety precaution to avoid eye strain from too much light.

Some of the issues related to the eye from the projectors are associated with projectors that are counterfeit. Therefore be careful when looking for a projector and go for a genuine projector from the real manufactures. This is because the counterfeit projectors have not followed correct healthy measures for the consumers and are just out for profits.

When you are going for the projector, you should not hold back from getting the right one that you want and need. This way you c9ould enjoy your shows without too much pressure and get the best performance. But the most important thing that you should keep in mind is to look in ways you could be safe by following the right safety measures.

Projectors emit blue light as like television will. according to realnatural.org So don’t get much pressure about the projectors blue light.

Myself Ruby Vivian, I am a BIGGER-screen enthusiast and I can’t lie. Served as an electric technician for 7 years now, and I loveee what I do. You can learn more about me here.